Posted on February 29, 2016 by michaelstephendaigle

Don’t speak with  dust in your voice, from the shade of time left, dwindling days.

It is not the end I need to learn, nor the gaping sense of loss.

There will be time for that. I know its coldness.

Speak not of emptiness, of light fading, grayness filling; 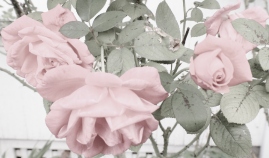 Tell me not of forgotten days; roses faded white.

Tell me instead of syncopation, of the dapple of falling rain, the scrape of wind, the tear of a broken heart, soft fingers touching, the rage of a sun rise, not the fading purples of sunset.

Oh, here you are: The million diamonds float on the blue water and you drop a line for that last trout.

Hooked ‘em, you did, reeled him in, fingered his smooth sides, watched his flashing eyes; then let him go. He floated, then renewed, splashed and dove deep. One last time, a wrinkled smile on your tan, weathered face.

And here: The snow on your cheeks as the machine leans in, a shout in your voice.

Behind you a roar; ahead, the endless white, the undefined point where earth and horizon meet. You push on, a voyager.

Fill your voice with the blue of your lover’s eyes, the tiny hand that grasps your finger; with the grunt of youth, the wetness of love, its taste on fingers and lips.

Color the air with epithets so foul the leaves change, hawks circle away and an old man dozing at the end of the street sees himself again ringside, sweating, beer guzzling below the thump of punches to distorted faces; bring him back to the deep luscious kiss she gave him when he won that cash; when time stopped.

Speak to me not of darkness in a husky ending whisper, between despair and reconciliation.

Scream about darkness shattered; yell to me about dancing.

Speak to me not in the aching exit voice.

I don’t want to hear it.

Whisper not,  but  shout, the crash of sound startling and brief, the silence endless.

I have been writing most of my life. I am the author of the award-winning Frank Nagler Mystery series. "The Swamps of Jersey (2014); "A Game Called Dead" (2016) -- a Runner-Up in the 2016 Shelf Unbound Indie Author Contest; and "The Weight of Living" (2017) -- First Place winner for Mysteries in the Royal Dragonfly Book Awards Contest.
View all posts by michaelstephendaigle →
This entry was posted in Fiction and tagged "A Game Called Dead", "The Swamps of Jersey" Imzadi Publishing. Bookmark the permalink.

2 Responses to The aching exit voice