The ‘Weight’ is over. Third Nagler story done (except for the typos, editing and changes)

Posted on September 23, 2016 by michaelstephendaigle

I had just typed the last word in the last paragraph of the third Frank Nagler story, “The Weight of Living.”

Except for the typos, the edits and rewrites, but all that, in the world of book writing, constitutes done.

And it’s not really a draft, because I write and edit constantly. On my reserve hard drive I have maybe twenty versions, and a dozen more cut outs, stuff that got deleted, reused, or never made it at all.

I was smiling because I knew what the last line of the book would be weeks ago and had to maneuver the story and characters through the traffic jam of plot to get to the point when I could add the last sentence.

The surprise is that the line is not delivered by the character I first imagined would do so, nor in the setting I thought. It works better where it ended up.

What’s the book about?
Finding the identity of a young girl abandoned on an Ironton, N.J. street in the middle of a cold March night. It’s a tale that has Detective Frank Nagler reconnect with an old nun whose family has a dark secret, with deceit, and manipulation. It is about some of the most broken characters I have ever written about. It is about their salvation.

That is why that last line made me smile.  In six words the line offered the redemption that all the broken people were seeking.

Some of you won’t like it, and I’m sorry. It’s not a shoot-‘em-up. It’s not about terrorism or cheating spouses, or gambling or zombies  or aliens — all of which are fine; not set in a flashy location, but instead, an old mill, town trying to survive. 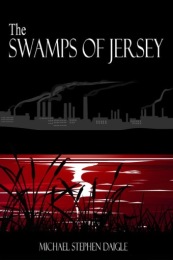 Its plot is closer to “The Swamps of Jersey,” with its ups and downs and numerous possible bad guys, than it is to “A Game Called Dead,” which was a race to the end.

But I like it, a lot. It was the hardest of the three Nagler books to write, but that is the goal, somewhat, to present a challenge to yourself.

That said, I’m going to give Frank and the gang a vacation.  We’ve been palling around for the past four years and I have other projects to take on, and other characters calling for my attention. But I have other Nagler stories to tell.

Maybe it will be Smitty, the baseball hero of “The Summer of the Homerun,” http://wp.me/p1mc2c-7x whose rambling untitled tale opens:

“This story starts with me hanging from a tree branch about forty feet in the air after my successful effort to break the one I was standing on.

It was a successful effort.

We needed the fire wood.

Life is about hanging on to something, and at that particular moment I was glad I had that other branch to hang on to. The ground seems awfully far away.”

“The Diner was shrugged under the last of the gigantic spruce  trees that once stood like a castle wall around the Inn’s property;  tucked it was into the drooping green barrier,  a spy, like some country boy on the roof of the grocery with binoculars watching the New York girls on the lakeside veranda, laying on their  blankets with their bikini tops unhooked, their tight little asses  tanned against the  white bikini bottoms, waiting for one of them to roll over and for one magic second point a pair of sharp white titties to the sky.  Did they not see us on the roof, Henderson always wondered? Did they not know how exotic they seemed to the collection of teen-aged boys  gathered there, grabbing the glasses out of each others’ hands  and yelling, then  ducking when one of them thought one of New York girls might have looked their  way?  But of course they didn’t see us, Henderson knew.  They arrived with their families in long sedans, stepped from the back seat with  shades and ear buds, phone in hand, tight shorts and cut-off T-shirts and stretched, arching their backs like  a cat, then took three steps and lowered the  shades half way and with an  Oh my God, mother, what are we doing here, glanced up and down  the dusty main street of Mount Jensen, Maine with its five houses, old schoolhouse, unpainted church and a grocery store and decided that the two days at the Inn, before their week at tennis camp, were going to be the worst days of their lives.”

If you have not read the first two Nagler stories:

I have been writing most of my life. I am the author of the award-winning Frank Nagler Mystery series. "The Swamps of Jersey (2014); "A Game Called Dead" (2016) -- a Runner-Up in the 2016 Shelf Unbound Indie Author Contest; and "The Weight of Living" (2017) -- First Place winner for Mysteries in the Royal Dragonfly Book Awards Contest.
View all posts by michaelstephendaigle →
This entry was posted in Fiction, Hot in Hunterdon; Georjean Trinkle, http://www.sallyember.com, Imzadi Publishing LLC, Michael Stephen Daigle, Mystery Writers of America, www.michaelstephendaigle.com and tagged "A Game Called Dead", "The Swamps of Jersey" Imzadi Publishing, Fiction. Bookmark the permalink.

3 Responses to The ‘Weight’ is over. Third Nagler story done (except for the typos, editing and changes)