Posted on June 10, 2020 by michaelstephendaigle

I have been asked why I don’t record audio versions of my own Frank Nagler Mysteries.

Years ago in a series of interviews we did for a voice-over showcase produced by Xe Sands https://www.xesands.com/, my friend Diane Havens https://soundcloud.com/diane-havens said that the key to voice acting is the acting – taking the words and drawing out the character within. 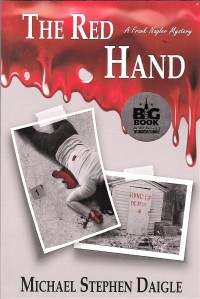 That is not a skill I possess.

I can write the words, imagine the conflicts, develop the plots and create the scenes, but the words of the characters in my mouth are flat and uninspiring. You would not want to hear much of it.

Dane’s version of THE RED HAND is similar to a song writer who after producing a version of their own song, hears a new artist working in another style of music sand off the rough edges and polish the tune and lyrics to a crystal perfection that stops you in your tracks.

Don’t get me wrong – and I’m not supposed to do this as an author, but what the hell – THE RED HAND is a hell of a story and a damn good book about a damaged town, a damaged man and yet the story comes out the other side offering some hope.

But as I was listening to Dane’s reading I was stopped because his performance was spot on.

A listener can not help but smile when Manny Calabrese, an old Italian jeweler whose voice never lost the old country, calls out to “Franky” Nagler. And his ethnic characterizations are both subtle and respectful.

But it’s at the story’s big moments that Dane’s reading excels: Reporter Jimmy Dawson’s four paragraph summary of the state of Ironton; the moments when Frank Nagler walks the dark city pondering the crime spree he is investigating and his own life with his sick wife Martha; the street fights and the crowd scenes that illustrate the rising tension in the city; and the continued edgy conflict between Nagler and Police Chief Inspector Chris Foley.

And then Martha. She is smart, funny, brave, adventurous and challenging and loves Frank Nagler to death. Any scene she is in sparkles, and at the end, when she and Frank deal with the consequences of her illness, the ache and anguish is palpable. Dane’s reading will stop you.

Anyway, why do all this? It’s not about being immodest. It’s about celebrating the talent that helps brings all artistic endeavors to light. It’s never just the work of one person.

The audiobook version of THE SWAMPS OF JERSEY is available here: