Posted on August 31, 2020 by michaelstephendaigle

Thanks to Karen Doctor for the opportunity.

THE RED HAND: It’s the time of pay phones, fax machines and piles of paperwork.

And in Ironton, N.J., nine women have been killed, their deaths played out over months as fear grows in the city.

Into this scenario is newly-minted Detective Frank Nagler, eager to take on the task of finding the killer, but daunted by the description supplied by the medical examiner: “What we have here is an experiment in death.”

“The Red Hand” is a prequel to the award-winning Frank Nagler Mystery series. Among the characters we meet are Charlie Adams, a teenage hoodlum and Martha Nagler, Frank’s wife, whose love carries him through the bad times ahead. 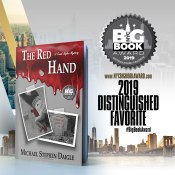 Can an old-style detective story capture a modern audience?

It can if it is filled with characters that resonate, has a love story for the ages, settings that carry weight and is layered with issues that raise the story above the everyday.

Women are missing. Missing would imply a willingness to leave.

Women are not missing: They were taken.

Elite Choice Awards Judge feedback: Author Michael Stephen Daigle has delivered a truly masterful work of fiction. From the very first page, the story draws you in and has you hooked. The writing is fast passed and punchy and he book is filled with vivid descriptions. The characters  have been well-developed and it is evident that their backstories have been meticulously crafted.  Overall this book is highly recommended for readers looking for a compelling murder mystery that will keep you on the edge of your seat!

Named a Distinguished Favorite  in the 2020 Independent Press Awards

A Nominee in the 2020 TopShelf Book Awards