Posted on November 11, 2013 by michaelstephendaigle 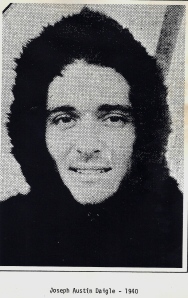 In 1939, my father, Joseph Austin Daigle, 21, was a member of the crew that accompanied Adm. Richard E. Byrd on a two-year voyage to Antarctica, a mission known as “Little America III.” This is the 74th anniversary of the voyage.

The voyage was credited with discovering several new mountain ranges, five islands, more than 100,000 square miles of area and 700  miles of unexplored Antarctic coast.  In 1941 the crews also helped evacuate American outposts on Antarctica in anticipation of the upcoming war, and later one of the ships, The U.S.S. Bear patrolled Greenland looking for German spies.

Information  on this voyage, including video shot at the time, and a copy of my father’s memoir,  and other Antarctic related material can be viewed at http://www.antarctican.org.

He served on the Bear, a converted whaler, and called by the U.S. Coast Guard one its most famous ships.  The Bear was lost at sea in the 1960s during a tow to Philadelphia, where it was to serve as a floating restaurant.

Armed with a degree in radio and electricity from Chenier’s  Business and Radio College in Beaumont, Texas, he had joined the Navy in 1938.  He was asked to participate in the voyage by a fellow Navy radioman charged with finding  volunteers for the Byrd trip.

My father and I never got along in a deeply complex relationship.  All you need to know about him is that when his five kids went to Texas to bury him a decade ago, we walked into the senior citizen building he had helped build to tell the members of the group that we were in town and offered what help we could for the funeral, they looked at us and said, he never told us he had kids.

But this voyage was an amazing part of his life, perhaps its crowning achievement, and is worth remembering.

I wrote previously about this in a commentary called “My father’s penguin,” which can be read in the archives at http://wp.me/p1mc2c-3q.

In 1987, he published a small memoir.  What follows are several excerpts.

On what the trip meant to him: “Picture, if you will, a young man who had come from a small town in Southeast Texas, who had never been very far from home. Here he was very quickly swept up into young adulthood, adventure, inexhaustible experiences, and, who gained a wealth of knowledge. He had seen part of the world he had only read about in geography and history books, and he helped to make history by his own contributions.”

Life on the Bear: “The Bear was a fairly comfortable ship. There was an evaporator  onboard, the ship capable of making fresh water….We also collected rainwater and used it to wash small amounts. … One learns to cope with all types of situations.

Our living quarters was one big room with tables in the middle and on  the sides – and folding bunks.

In Panama, they took on supplies, including fresh pineapple:  “I ate so many slices of the fruit that I quickly lost my appeal for the taste.  It took 15 years after the expedition before I could eat another piece of pineapple.”

On crossing the equator: “The equator is an imaginary circle on the earth’s surface, equidistant from the poles, dividing the earth into northern and southern hemispheres.”  (Naval tradition is to initiate sailors crossing the equator for the first time.)  “The initiation can get pretty rough. One might find oneself stripped and splattered  with paint; or in uniform wrapped around with toilet paper and painted all over; or in places food was served – but not edible…. Crossing the 180th meridian, one receives  a certificate… In those days it was a rare event as travel to great distances was not being done.”

One passing through the Strait of Magellan:  “The strait is a passage separating the mainland of South America from the Tierra del Fuego islands and connecting the Atlantic and Pacific oceans. … I found sailing through this strait an exhilarating experience. Sailing through this passageway is likened to a funnel with a vacuum.  One night as we sailed through, we came to a very narrow waterway through the strait.  Harsh winds began to buffet the ship.  It was decided it was too dangerous to steam through after nightfall, so we dropped anchor. The winds continued to blow only stronger. The ship shuddered and groaned  as it was slowing being dragged to toward the rocks despite the anchor’s dug in at great depth… (soon) we were able to inch forward a little at a time.”

Scenes from Antarctica: “Communications became more difficult as we moved closer into the Antarctic Circle. One day after we had arrived at Little America, we were listening to President Roosevelt give an address on the war situation in Europe. On September of 1939 the war had begun in Europe but the United States had not yet become involved…. We were listening intently and the President was assuring the American Public that even though war was raging in Europe, we would not get involved. Suddenly, a swishing sound came over the shortwave radio and out communication lines were severed….For the first time we realized he hazard of being without communications and cut off from the rest of the world.”

“As we entered the Ross  Sea, we met an ice pack some 200 miles prior to our arrival at Little America and our destination, the Bay of Whales….For those of us who  had not been to Antarctica before this trip… it was an awesome sight.  We had been sailing on clear, blue waters and all of a sudden, we were faced with an ice pack.  We hit one stretch where the pack was 30 to 40 miles wide…(We approached) places where the ice was 2 to 4  feet above the water…. The best way to describe it is to envision a high rise building in the midst of blue waters.”

“One of my favorite pastimes in port at the West Base was to observe the wildlife.  It was fascinating to see whales blow spouts of water or chase penguins. The penguins were entertaining to watch as they executed their sensing ability and dexterity in determining the safety of the ice and height from the water line to the ice shelf.  I have seen whales chase one and, as it to the ice shelf, jump  out of the water and land on top of the shelf above on its feet regardless of the height…. A few whales found it entertaining to swim around the Bear out of curiosity trying to determine whether or not we were one of them.”

It was interesting to read at the end of his story, my father noted that the ice shelf where the camp known as  Little America  was planted had broken off the continent.  The loss of the physical site heightens the importance of such small histories and memoires as this one.

I have been writing most of my life. I am the author of the award-winning Frank Nagler Mystery series. "The Swamps of Jersey (2014); "A Game Called Dead" (2016) -- a Runner-Up in the 2016 Shelf Unbound Indie Author Contest; and "The Weight of Living" (2017) -- First Place winner for Mysteries in the Royal Dragonfly Book Awards Contest.
View all posts by michaelstephendaigle →
This entry was posted in Commentary and tagged Adm. Richard Byrd, Little America Joseph Austin Daigle. Bookmark the permalink.