What’s in a title?

Posted on March 22, 2015 by michaelstephendaigle

When scenes like this appear, I think I need to change the working title of “A Game Called Dead,” my work in progress, to something else.

So what is a title? A catchy phrase? The story in microcosm? I had thought originally that the three Nagler books would play off the “Game” theme; the first one was originally called “A Game Called Dead.” But that was changed to “The Swamps of Jersey” when I relocated the story, added a new plot, new characters and generally wrote a different book, and “Dead” became the second book in the series.

So maybe I use the “swamps” theme. “A Deeper Swamp” might work. I’ll work on it.

“Nagler had walked three blocks around the stalled train and faced that barren parking lot again. How many times have you been here, staring, shaking your head at the waste, the loss, the what should have been.

Admit it, he told himself, you come here looking not just to see if someone at City Hall had gotten off their fat ass to complete the park, but to see if she had come by to view her handiwork. You always thought you’d see her at the corner of the busted chainlink fence, where for two years since the flood ripped that place apart that battered blue Toyota had been resting on its roof, rusting wheels tireless pointing skyward, the hulk like the skeleton of some dead river beast; where she once stood shading her eyes against the afternoon sun and pinning you in place with that wide, deep smile. You thought you’d see her again, thought you’d see her again standing right there; thought… 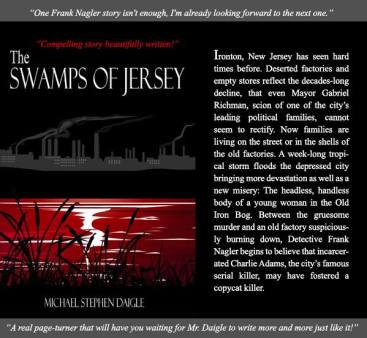 Nagler stopped walking and stared at the ground a moment, closing his eyes to the grey torn parking lot…Thought she’d come back.

A slight breeze pushed a skittering soda can across the broken asphalt, sometimes rolling, sometimes end-over-end, spun by a random rock or crack, the tinny echo the only sound in the vacant, hollow space, the useless song of decay and loss and emptiness; the song, he decided, of ourselves. Of me.

I thought I’d stopped looking for you on the street, in crowds, stopped wondering if that blue hat ahead was yours, if the bobbing head of brown hair matched your steps, stopped worrying that the voice from around the corner in the hallway was yours. Stopped wondering if the crystal laugh that burrowed a hole in the chatter filled air, the laugh that crashed in from somewhere unseen, that laugh whose timbre and timing was stored in memory…

I had stopped, he thought.

The story of how Ironton, N. J. Detective Frank Nagler got here is told in “The Swamps of Jersey” published by Imzadi Publishing, Tulsa, OK.

Available at Amazon.com and barnesandnoble.com.

I have been writing most of my life. I am the author of the award-winning Frank Nagler Mystery series. "The Swamps of Jersey (2014); "A Game Called Dead" (2016) -- a Runner-Up in the 2016 Shelf Unbound Indie Author Contest; and "The Weight of Living" (2017) -- First Place winner for Mysteries in the Royal Dragonfly Book Awards Contest.
View all posts by michaelstephendaigle →
This entry was posted in Fiction and tagged "A Game Called Dead", "The Swamps of Jersey" Imzadi Publishing. Bookmark the permalink.