Posted on November 10, 2016 by michaelstephendaigle

“A Game Called Dead,” is the sequel to “The Swamps of Jersey,” the first Frank Nagler Mystery.

Nagler is called to investigate the brutal attack on two women at the local college. It begins a tale of urban terror, much of which seems to be directed at Nagler and his associates. 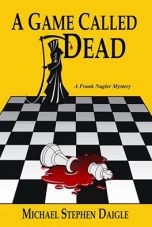 The story introduces the mysterious terrorist #ARMEGEDDON, who taunts the police from cyberspace.

The title comes from the students’ name for a video game that has taken on a real-world life.

“The Swamps of Jersey” tells the story Ironton, N.J, Detective Frank Nagler, who must sort out the murder of a young woman, allegations of political corruption, a hint that the city’s famous serial killer may have a copycat, and the disappearance of his girlfriend. The story opens at the end of a weeklong tropical storm that wrecked the distressed city.

The third book in the series, “The Weight of Living,” will be published by Imzadi Publishing in early 2017.

The first two Nagler stories are available at:

I have been writing most of my life. I am the author of the award-winning Frank Nagler Mystery series. "The Swamps of Jersey (2014); "A Game Called Dead" (2016) -- a Runner-Up in the 2016 Shelf Unbound Indie Author Contest; and "The Weight of Living" (2017) -- First Place winner for Mysteries in the Royal Dragonfly Book Awards Contest.
View all posts by michaelstephendaigle →
This entry was posted in Fiction, Hot in Hunterdon; Georjean Trinkle, http://www.sallyember.com, Imzadi Publishing LLC, Michael Stephen Daigle, Mystery Writers of America, www.michaelstephendaigle.com and tagged "A Game Called Dead", "The Swamps of Jersey" Imzadi Publishing, "The Weight of Living", Frank Nagler, New Jersey. Bookmark the permalink.