Posted on March 21, 2018 by michaelstephendaigle

Writing a prequel is hard.

I already know everything that is supposed to happen, and faithful readers (THANK YOU!) have an expectation that I will explain it all as I look back at the beginning of the series.

So, that’s what I’m trying to do with the Frank Nagler prequel, so far titled JUST COME HOME.

I’m wading back through the written pages to connect the parts that need connection, add red herrings as necessary and change dialogue to make it  more anticipatory or more pointed and reflective of the characters at that point of the story.

But while I was reading THE SHIPPING NEWS, the Pulitzer Prize winner by Annie Proulx, I was admiring how she layered the present and past and melded her cast of sharply drawn characters to pull the story together.

With that example in mind I thought about what I had tried to do in the three books in the Frank Nagler series.
They are mystery series, and crime solving drives the stories.

But they are more. 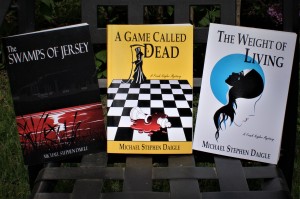 They are stories about a struggling city, Ironton, N.J.

I designed Ironton as an enclosed place, with a mythology all its own. To borrow the advertising slogan: What happens in Ironton, stays in Ironton.

In the series opener, THE SWAMPS OF JERSEY, Ironton, economically depressed and swept to near-disaster by a weeklong storm, is a picture of Hell.

In response, after several sleepless nights as part of the storm response, Nagler tells a Noah joke:

The ancients knew what to do with rain like this, he thought wickedly, squinting into the horizontal blast of water.

Conjure an honest man with a ship and spin a parable about the wages of sin.  Nagler laughed sourly. And then get out of town.

Nagler is the city’s “honest man.”

But more, Ironton is a city ripe for evil:

Nagler plowed his car through the treacherous bumper-deep water that filled the downtown streets. Random spotlights, swinging loosely from dangling wires on damaged poles or hanging off ripped roof tops banged with the hollow, doomed echo of cathedral bells at the end of times and flashed a shifting and sinister light on flooded parking lots or intersections rippling with dark water. Store after store was dark, some with boards covering glass windows; others had jagged shards of glass that gleamed menacingly in the fractured light, hanging in dented window frames.

How did the city get there?

That’s what JUST COME HOME is meant to explain. How does the city respond to a serial killer? Who is trying to gain political and economic advantage by the crimes? Who is trying to take advantage of these death for personal gain? How deep are all those connections?

At the same time, Nagler, facing the death of his wife, Martha, slides into a deep loneliness that borders on depression. The challenge is how to present this slide at the same time as we follow his effort to solve these murders. His methods of crime solving feed his isolation.

In this scene for JUST COME HOME, Nagler is revisiting the home of one of the two older women who are missing. In a previous scene, Martha had re-entered the hospital for medical tests.

The house felt as cold and stark as a mausoleum, Nagler thought.  The family had boxed up  many of the loose possessions and clothes and stored them in a back room, rolled up the rugs and wrapped them in plastic and covered the furniture with cloth tarps.  Valuables had been removed to a bank safe deposit box. Every step echoed.

Nagler’s question hung in the air: Are you planning for a funeral or for her return? It was odd, he thought, to be between the two, stuck unknowing, emotions both frayed with concern and buoyed with faint hope; odd how much they looked alike, the hollow of emptiness and the fullness of hope.

And here am I, he thought. What do I do?

From this point in the story forward, Nagler is caught between his broken heart, the loss of Martha, and finding the killer. Does one inform the other?

In the mythology of Ironton, N.J. the answer has to be yes.

The question is how.

I have been writing most of my life. I am the author of the award-winning Frank Nagler Mystery series. "The Swamps of Jersey (2014); "A Game Called Dead" (2016) -- a Runner-Up in the 2016 Shelf Unbound Indie Author Contest; and "The Weight of Living" (2017) -- First Place winner for Mysteries in the Royal Dragonfly Book Awards Contest.
View all posts by michaelstephendaigle →
This entry was posted in BooksNJ2017, Fiction, Greater Lehigh Valley Writer's Group, Hot in Hunterdon; Georjean Trinkle, Imzadi Publishing LLC, Michael Stephen Daigle, www.michaelstephendaigle.com and tagged "A Game Called Dead", "Just Come Home", "The Swamps of Jersey" Imzadi Publishing, "The Weight of Living", "Who shot the smart guy at the blackboard?", Anita Dugan-Moore., Fiction, Frank Nagler, Imzadi Publishing, Ironton, Kirkus Reviews, Royal Dragonfly Book Award, Shelf UnBound. Bookmark the permalink.