Posted on April 13, 2018 by michaelstephendaigle

The third Frank Nagler Mystery, “The Weight of Living,” has been named a Notable 100 Book in the 2018 Shelf Unbound Indie Book Awards. 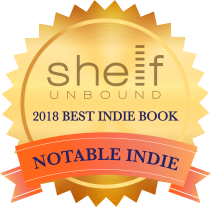 Thanks to Shelf Unbound, and to the Imzadi Publishing gang, Janice Grove and Anita-Dugan Moore.

Anita’s cover for “Weight” was presented a Gold Medal by authorsdb.com, an author/readers database site.

Also, a shout out to Kathleen Tate, Imzadi’s copy editor, who was so concerned about the abrupt ending of the story, when she sent back the proof, asked if I had sent her the complete manuscript.

It’s been quite an interesting few months for “The Weight of Living.”

It was also awarded FIRST PLACE  for Mysteries in the 2017 Royal Dragonfly Book Content.

Both Shelf Unbound and Royal Dragonfly are multi-media companies who produce monthly magazines sent to schools, libraries and similar outlets. They also generate reading material for use in schools, and each are deeply in the business to reach parents and young readers.

In 2016, Shelf Unbound named the  second Nagler book, “A Game Called Dead,” a Runner-Up in their annual book contest.

Winners in these contests are chosen by blind readers, who are industry professionals. It seems a fair test. And I don’t have to bother friends and family to vote online a thousand times.

Entering the contests also gets the books out of the maddening clutter of Internet marketing, and seems to produce a fair result. If no judge likes your book, you don’t win.

And I’m out-of-this world happy for Janice and Anita. The two of them offered media support beyond what anyone might expect from a small publisher: YouTube trailers, ads, continuous online messaging and links, and then this month, a audiobook version of the first Frank Nagler book, “The Swamps of Jersey.”

The book was read and produced by veteran voice artist and writer Lee Alan.

I would be honored and grateful if you read the Nagler mysteries, or listened to Lee Alan’s fine reading of “The Swamps of Jersey.”