In honor of Shakespeare Day: Romeo and Juliet, Bennie Garza, and Martha Nagler: From THE RED HAND

Posted on April 23, 2020 by michaelstephendaigle

“Do you remember the first time we came here?” Martha asked as

she picked another rose, this one freshly petaled, and inhaled its soft

scent. Then she offered it to him, and he buried his nose in the flower

before kissing her hand.

“It was seventh grade, after you played Juliet, opposite, what was his

“Bennie Garza,” she smiled. “Bennie, Bennie, where for art thou,

Bennie? He was always trying to tongue me when we kissed. But I had

braces, and he’d jam his tongue against them. I almost laughed in the

She threw an arm across her breasts. “I pointed at you in the front

“I remember. I felt there wasn’t anyone else in that auditorium but

He leaned over to kiss her but stopped and pulled down her lower lip.

She smiled and bit his finger. “And then you were mad at me the

the bushes and all I had wanted to do was recite Shakespeare, I loved

the language so much,” she laughed, then rolled sideways to kiss him. “I

was still high from the performance. Even with Bennie Garza as Romeo,

it was such fun.”

She held up the rose.

“What is this rose, dear one, what are its charms…”

Martha just smiled, and then comically cleared her throat.

“Does it not blush, as do I, at the mention of your name, at the touch

of your hand?” She brushed the flower across his cheek and he smiled

deeply at her performance. “Does it not pulse with life when brushed

with pollen, drink in the dew?” She pulled off a petal. “And is it not

so frail?” She pulled off another petal and let it drop gently from her

fingers to Nagler’s chest. Her voice softened and trembled. “Its time is

so brief, its beauty so rare.” She jerked off the remaining petals, leaving

a bald stalk. Her voice harsh and firm. “It is time that I want, time with

you, sweet rose, before the petals fade; time I do not have. Time no one

She threw the rose stalk away and rolled into Nagler’s arms, closed

her eyes and signed deeply.

“How was that?” she whispered. “I liked acting a lot. I wish I hadn’t

gotten sick when I did. I would have loved the chance to act in college.”

Nagler lay down on his back beside her. That had been the shock

and the great test, he knew. Leukemia at nineteen. And two years of

treatment, then two more of recovering her strength and watching her

“I would have been a better Juliet in college, you know, in case you

were wondering,” Martha said to the sky after she had rolled onto her

back. “By then it was more than words. I knew about the loss, the pain,

facing death and had already experienced the great love” —she touched

his face— “and felt the poetry flow through me, the words of a soul’s

awakening coursing in my blood, bursting through the brain’s barrier,

She rolled to her side and faced Nagler, gently touching his face with

a single finger and kissing his eyes, cheeks, and mouth.

“That’s what that…that damned disease nearly took from me, Frank,”

her voice now hard. “That chance. You were my Romeo, dear Frank.

And for a moment I thought I would lose you.”

“No.” Words were trapped in his throat, unable to move. “Never,” he

She kissed him, holding his damp face in both hands. 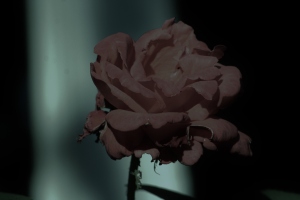 “Could be,” she said, her voice distant. “I had already lived that death

scene. Had already known the poison in my veins, felt the dragging pain

stiffen, breath slow, colors fade, to see a descending haze and have no

way to cry out. To see the hovering outline of a dark companion.” She

covered her mouth with her hands and stared at the ground, eyes moist.

“I knew the loss,” her voice soft and shallow. “It would have been easy

to act it out on a stage, when I had already lived it. To die and then

recover. The hope of finding my love at my side. The tears on my face

at that moment would have been real.” She paused and caught a breath.

“Then my eyes opened, and it was Bennie Garza. Oh, why Lord?”

I have been writing most of my life. I am the author of the award-winning Frank Nagler Mystery series. "The Swamps of Jersey (2014); "A Game Called Dead" (2016) -- a Runner-Up in the 2016 Shelf Unbound Indie Author Contest; and "The Weight of Living" (2017) -- First Place winner for Mysteries in the Royal Dragonfly Book Awards Contest.
View all posts by michaelstephendaigle →
This entry was posted in Hot in Hunterdon; Georjean Trinkle, Imzadi Publishing LLC, Michael Stephen Daigle, www.michaelstephendaigle.com and tagged "A Game Called Dead", "The Red Hand", "The Swamps of Jersey" Imzadi Publishing, "The Weight of Living", Frank Nagler, Michael Stephen Daigle. Bookmark the permalink.