Posted on May 11, 2015 by michaelstephendaigle

“A Game Called Dead,” the sequel to “The Swamps of Jersey,”  is a story filled with action and soul-searching, more about redemption than death.  This  scene is a designed as a break from a couple chapters on non-stop stuff, that I even needed a break from.

“The Swamps of Jersey” and I will be at the  June 14 Book Fair at the Paramas Public Library. Event details at http://www.booksnj.org

The scene: “Leonard felt the heat of the sun on his face and sighed. It had been weeks since he had been outside of his shop, and finally Delvin Williams had kept his promise of a long stroll. 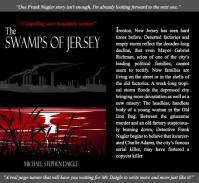 The air smelled of November, Leonard thought. A cold, crisp scent of fallen leaves, musty and old, the sweet hint of the last flowers, dying on brown stalks, awaiting the killing frost, the muddy aroma of the cold, dark river flowing below the cliff where they had stopped.

He lifted his chin and smiled into the sunlight.

“You awake, there, Lenny?” Del asked.

“Yes, Del, I’m awake. This is how I set myself free. I can not get out of this chair, so I set my soul sailing, grab the air and sun in double fists, ride the breeze, draw in all the aroma and life there is and it sustains me until the next time.”

“What about you, Del?” Leonard asked. “What do you think about when the weight of the world crashes down?”

“I think about standing between cars on the Phoebe Snow, taking a break after the dinner rush,” Del said. Leonard wished he could see his face because Del’s voice was so soft and wistful. “I’d take a cup of coffee and light up a cigarette and the wind would be rushing past cause that old train was humming along at eighty miles an hour, the wheels below clacking away, everything moving fast except the sky and the horizon. They’d be passing by at their own chosen speed and the darkness would fill the world, but not like now, but in a beautiful, mystic kind of way. Lights from farms and houses dotting the darkness, then passing.” Leonard imagined Del pointing off with a long finger extended showing where the houses and farms were. “Then at the times we was passing the south shore of the big lakes, you’d feel a void in world, just this black hole, a magic place, not to be feared, but wondered at, trying to figure what it all meant. And the sky, man, filled with a million stars, a billion years old, their light such a gift that we were there at that moment to see it. And they be moving and glittering, and winking at me, just like that painting by the French guy, the one who killed himself, that starry night thing; the stars and the universe beyond shifting and twirling. It was a place to be.”

“How beautiful, Del. Thanks.”

“And the in the dining car, all the folks dressed up and polite. We had real table service then. White linen table cloths and napkins, real china, crystal glassware, heavy, honest-to-goodness silverware. And we’d be chattin’ with the guests, could be a lawyer and his family, a banker, regular folks on a trip, kids heading to college, even the poor folks scraping enough change together to grab some coffee and toast, maybe; and maybe we’d slip them some eggs and bacon, know what I mean, cause we all had been there. And it was friendly, and by the end of the trip I’d know they names and they kids would call me ‘Mister Del’ and when they left the train in Chicago, I’d see them on the platform and they’d wave and smile and I’d yell, “See y’all on the trip back.’ “

Del paused a minute. “It was a time, Lenny. We was all someone. Now, I’m not simple enough to believe that some of them folks did not go back to their circle of friends and complain about the train niggers, nor so disbelieving to disavow that some of the train crew looked in their pockets at the end of the run and bitched about how cheap whitey was. But know what, those that bitched sometime never made the return run. Off they went to complain about life to a cheap bottle. But, Lenny, I been there, before the Phoebe Snow and after. Was there a couple of years ago when old Frank found me in the stoveworks before Chris Foley burned it down, convincing myself I was the king of the world, when what I had become was a fat old junkie fixing to die.”

“I’d heard that, Del. How awful,” Leonard said. “I’m so sorry, but I’m glad you recovered and we are now sitting here together to talk about it.”

Del smiled, and touched Leonard’s hand, knowing he could not see the smile.

“I think about that time, especially when I’m with the kids at the center. They want to be somebody. Just like the dude who’s burning down our city. He wants to be noticed, to be someone, but I can’t cipher who he is trying to impress. I’m guessing that when ol’ Frank figures that out, this whole mess ends in a hurry.”

I have been writing most of my life. I am the author of the award-winning Frank Nagler Mystery series. "The Swamps of Jersey (2014); "A Game Called Dead" (2016) -- a Runner-Up in the 2016 Shelf Unbound Indie Author Contest; and "The Weight of Living" (2017) -- First Place winner for Mysteries in the Royal Dragonfly Book Awards Contest.
View all posts by michaelstephendaigle →
This entry was posted in Fiction, Michael Stephen Daigle and tagged "A Game Called Dead", "The Swamps of Jersey" Imzadi Publishing. Bookmark the permalink.