A late night with a dying dog

Posted on October 7, 2016 by michaelstephendaigle

(Some things you have to write)

What were you chasing in your dreams at 3 a.m.?

That groundhog that you willingly dove under the shed to drive away? That cat whose scent you picked up from an inch of water on the patio, the cat I saw scamper from under the table to under my truck, the cat whose trace you detected during the downpour?

Whatever it was for that moment your voice, stilled by age, returned, and we sat on the floor alone together. 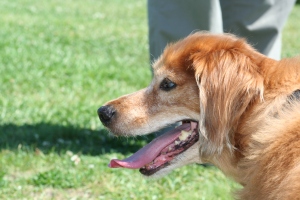 For 17 years it was you who taught my kids caring and love and how to reach beyond their childish hurts to share the things you bought to the family.

If you doubt that, you did not hear my son crying like a baby when he and you sat in the sunny backyard for that last hour, reliving the times and games, comforting you; crying not in self-pity, but because there was no more time.

Or did not drive with my daughter from the college with her heart in her throat to comfort you and say farewell and take that long silent ride to the vets, before driving back to school for classes, knowing that you gave it all in your dogness and enjoyed all the time you had.

Jaxson was their dog, raised by them from a puppy, who herded them in the backyard, chased them up stairs, stole their sandwiches grinning when they placed them on a too-low table, led them on neighborhood escapes and licked their faces in happiness and sorrow.

And even now, after they have moved out of the house, Jaxson was who they sought out when they returned.

So there we sat, buddy, you and me, you dying and me knowing there was nothing I could do except somehow keep you comfortable.

Two days before you had been stumbling cataract blind through the house as usual, following the walls and cabinets to find your food and bed, or to lean against my legs, sleeping long hours, rolling off your bed to awkwardly sit, then tumbling into the kitchen at the sound of cooking, just in case.

Refused food and water. I gave you one last bath to wash the pee out of your fur, and laid you on your bed, from which you did not – could not—rise.

All I could offer was soft words and a scratch of your nose, the spot between your eyes that brought you Nirvana. We want to rage against the passage of time, demand the things we love remain, but in the end we are Voyager  sailing through the ether, taking snapshots. Here, look.

These bodies are so much weaker than spirits. We aged together Jaxson, limping together in the back yard – me on an aching left foot and you on legs that shrunk from age and some condition, eyes darkened with cataracts.

But then you’d put your nose to the ground and all the scents of the neighborhood critters would telegraph their presence and you would amble off, a slower, smaller version of your puppy self; nose the ground for a short walk that would end  when I would turn you before you got to the alley, cheered by the knowledge that your hunter spirit lived in  that broken frame; cheered by the too-numerous-to-count neighborhood chases with you, nose down, in the lead and me and the kids racing behind, then watching as you’d stop and grin at us before resuming the chase.

Then you’d stop in a few blocks, or a neighbor would call to say you were in their yard, sitting waiting for us. Jaxson the game master.

Cheered as I recalled how on those last minute late night visits to the back yard you’d put your nose in the air and take a 360-survey of the state of the world and I would marvel at that amazing skill and ponder what the air told you.

Cheered as you’d chase the water from the hose, sent by the kids in a streaming arc; how you’d dive into air, sprint across the lawn to catch the drops in your mouth, or with grandson Aeden at the controls fight off the direct spray so not to drown; then springing again into the air, splashing down, sometimes hard, bouncing back, finally to sit, soaking wet and grinning when the game ended.

In the end we think of you not as the old-man dog, but as the dog who caught the rain.