The fictional ‘It’ and the ‘Not-It’

Posted on March 29, 2017 by michaelstephendaigle

Sometimes there is no way to boil down the choices ones makes while writing a story.

That issue surfaced at a recent meeting of the Phillipsburg Library writers group after I read the opening of the next Frank Nagler mystery, “The Weight of Living.” 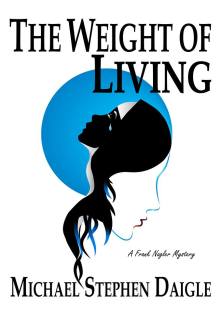 To my regret, I answered the questions a little less artfully than I should have, instead perhaps sounding annoyed or even defensive.

A happenstance in mysteries is that characters lie. All the time.

Authors also lie and misdirect by leaving out pieces of information or adding information through  a character that is deliberately misleading.

I sometimes call this the “It” and the “Not-It.”

This is part of the scene. The girl was discovered standing in a Dumpster outside a grocery store on a frigid March night:

“She seemed hollow, the girl did.  Breathing, hearing, touching, but absent.  Small, dark dots sunk into an ashen blank face, eyes impossibly dull for someone so young, eyes that stared straight ahead at the faded green wall; hard, eyes so hard that did not seem to register the color of the wall, the brown of the tabletop, the lightbulb above her head or the presence of anyone else; eyes lightless, passages not to a dark soul, but to one seemingly hidden or removed; spaces missing life. Eyes not filled with pain, but absence.

Robotic. From the police car to the police station and into the back office she walked with slow, short steps, and once in the room without being told, she slipped sideways into the green vinyl chair with the tear in the seat that exposed the white cotton batting inside; the chair that engulfed her, hips too small to fill the worn indentation in the center of the seat as she faced the wall, folded her hands on the table and sat upright.

Her hair was raggedly cut and filthy, as was her thin, damaged body.  Grime lived in her skin folds, under her fingernails, on and in her skin so deeply its color changed from white to brown-gray; dirt so thick her skin shed water like plastic.

She had been sitting in the back office at the Ironton, New Jersey police station for an hour after patrol removed her about ten o’clock that night from a grocery store garbage bin.  She had neither offered words, nor responded to questions, not even a nod or a shake of her head. A bottle of water sat on the table untouched.”

The questions were about the absence of an ambulance at the grocery store and why the police officer who found her did not place his jacket around her shoulders.

My response at the time did not convey that the exclusion of such acts was not an accident, but was deliberate.

The reason these two points matter is that the reader is convinced by this scene that the girl is homeless. The social worker later in the scene plants that suggestion, and the cops do what cops do, and plan a search for more homeless kids.

The question that is not answered is: How long as the girl been on the street before she is found? The reason the police officer cannot place his jacket on her shoulders is what he might discover at that point.

That is a clue to the girl’s situation that I as the writer did not want to give in the fourth paragraph of the story when this scene is analyzed and  explained  numerous times and by several characters over the length of the book, including in the very last scene.

Oh, how terrible that she is homeless. But is she?

The “Not-It” is the double take that Officer Garrett Alton later gives the girl as they cross paths at the police station. That part of the scene is slipped quietly in at the end, a seemingly normal, but unimportant detail.

“The Weight of Living” is due to be released on April 26 by Imzadi Publishing.

The other Frank Nagler books, “The Swamps of Jersey,” and “A Game Called Dead,” are available at:

I have been writing most of my life. I am the author of the award-winning Frank Nagler Mystery series. "The Swamps of Jersey (2014); "A Game Called Dead" (2016) -- a Runner-Up in the 2016 Shelf Unbound Indie Author Contest; and "The Weight of Living" (2017) -- First Place winner for Mysteries in the Royal Dragonfly Book Awards Contest.
View all posts by michaelstephendaigle →
This entry was posted in Fiction, Hot in Hunterdon; Georjean Trinkle, http://www.sallyember.com, Imzadi Publishing LLC, Michael Stephen Daigle, Mystery Writers of America, www.michaelstephendaigle.com and tagged "A Game Called Dead", "The Swamps of Jersey" Imzadi Publishing, "The Weight of Living". Bookmark the permalink.