Posted on September 30, 2017 by michaelstephendaigle

In the Frank Nagler Mystery series, I reimagine Dover, N.J., a town with a rich industrial and cultural past, as the fictional city Ironton, N.J. I also expand the confines of the city to meet the fictional needs of the story.

I worked in Dover and Morris County for 14 years as a reporter and got to know the town, the landscape and culture well.

Here a few of the Dover places I use in the books. 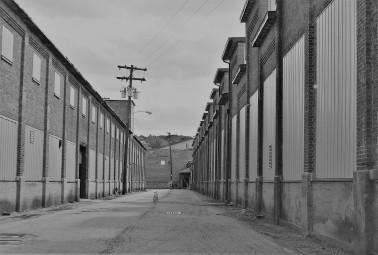 THE SWAMPS OF JERSEY:  “Nagler stopped by the stoveworks that night. It had been a mile long complex of thick walled brick buildings that lit up the night with forge fires and ever burning lights and drove away the silence with metallic screeches of metal wheels turning and grinding and the heavy slammings of boxcars, ore cars, cranes and iron parts.

Now it was a wreck of empty shells, the peaked roofs rotted to dust, the windows shattered by rocks and pistol shots, the bay doors of loading docks rippled with waterlogged paneling.

Lauren Fox wondered why Gabe Richman had not proposed to build his shopping center here.  She said it was a project the state would have funded.

A neon street light a block away flickered to life, brightened and flashed, then darkened.  The cycle was repeated about every minute.  It made the alleys between the forty-foot walls even more sinister; wind crept through broken windows, water dripped.”

THE SWAMPS OF JERSEY:  “The ancients knew what to do with rain like this, he thought wickedly, squinting into the horizontal blast of water.

Conjure an honest man with a ship and spin a parable about the wages of sin.  Nagler laughed sourly. And then get out of town.

Nagler plowed his car through the treacherous bumper-deep water that filled the downtown streets. Random spotlights, swinging loosely from dangling wires on damaged poles or hanging off ripped roof tops banged with the hollow, doomed echo of cathedral bells at the end of times and flashed a shifting and sinister light on flooded parking lots or intersections rippling with dark water. Store after store was dark, some with boards covering glass windows; others had jagged shards of glass that gleamed menacingly in the fractured light, hanging in dented window frames.”

THE WEIGHT OF LIVING: “After leaving the grocery. Nagler had shuffled along the main street through the morning’s half-light, watching the early traffic huddle at streetlights, puffing trails of white exhaust, then darting forward, drivers, ghostly shapes illuminated by faint dashboard lights, sipping from mugs and tapping phones. A few semis steamed at the curb, lights flashing as drivers rattled up the rear door and hauled out the bags of commerce they had to deliver before rolling the door to a slamming close and forcing the truck back into the traffic flow.

He banged open some shed doors looking for sleeping bags, Sterno cans, ashes on the floor and food wrappers, signs that some smart street kid, some feral kid, might leave.

But our kid is not a street kid, he decided.

Not in a tank top and shorts without shoes. ….

The air had an icy sting; frozen mist shrouded the streets.

She would not have hugged herself as she walked; the cold would have slipped like indifference from her hardened skin, her shell, her silent shell; like sin from the forgiven.

A GAME CALLED DEAD:  “Tell him I want to speak with him.”              “Yeah…”  But Barry said nothing else. He, like everyone else in the place had turned to face the door.  Barry’s was the kind of coffee shop where most everyone knew all the regulars, so when a new patron walked in heads turned, sometimes one at a time, sometimes the whole table turned, and the customers on the counter stools glanced over their right shoulders one by one until the whole counter crowd was staring. Usually they looked back at their meal or coffee quickly, paying no second mind, or maybe someone nodded a sly greeting.

But not this time.

This time is was Harriet-Waddley-Jones, her classic model’s face framed by her flowing dark hair and silhouetted by the sunlight pouring through the windows from the street, the collar of her black coat turned up against her face and neck, held by a crimson scarf wrapped twice around her shoulders, towering over all those seated, in high-heeled calf-length boots, eyes probing, shielded, until she spotted Frank Nagler and they brightened and she offered a small smile.

The entrance was, he decided, that of a beautiful woman who had been stared at her entire life, both a statement and a tease. An entrance perfectly staged; a trap.

“Hey, Frankie, I don’t think she is smiling at me,” Barry said. “You shoulda told me you had a date.”

THE WEIGHT OF LIVING: “At the Warren intersection Nagler saw that the eastbound commuter train had stalled and heard the sirens of patrol cars arriving. He limped the block to the rail line. Maybe, he thought, they have him cornered.

Instead, when he turned the corner of the building on that corner, he saw the red pick-up truck stopped between the crossing gates, blocking both tracks, surrounded by three patrolmen. Cars and truck stalled in the street honked and their drivers stood next to their vehicles, shouting.

“Maria,” he yelled into his phone, trying to walk quickly toward the scene. “What’s going on at the tracks, I jammed my foot and ain’t very mobile at the moment.”

Her sighed filled his ear.  “Truck’s empty, Frank.  Patrol is checking to see if it is wired for anything and then they’ll push it off the tracks into the parking lot.”

“Damn it. Tell whoever is in charge I’m a block away. Alton was wearing a big gray hoodie. He can’t be far.”

At the truck Nagler asked the patrolman if he saw Alton leave.

The kid shook his head. “No, sir, That’s me parked on Blackwell blocking traffic from entering the area. But I could see the cab was empty even a block away.”

Nagler looked around, into gray acreage of the main parking lot, up the steep hill on Morris and west along the track. Crap, he could have gone anywhere.”

I have been writing most of my life. I am the author of the award-winning Frank Nagler Mystery series. "The Swamps of Jersey (2014); "A Game Called Dead" (2016) -- a Runner-Up in the 2016 Shelf Unbound Indie Author Contest; and "The Weight of Living" (2017) -- First Place winner for Mysteries in the Royal Dragonfly Book Awards Contest.
View all posts by michaelstephendaigle →
This entry was posted in BooksNJ2017, Fiction, Greater Lehigh Valley Writer's Group, Hot in Hunterdon; Georjean Trinkle, http://www.sallyember.com, Imzadi Publishing LLC, Michael Stephen Daigle, Mystery Writers of America, www.michaelstephendaigle.com and tagged "A Game Called Dead", "The Swamps of Jersey" Imzadi Publishing, "The Weight of Living", Dover, Fiction, Frank Nagler, Ironton, Morris County, N.J., New Jersey. Bookmark the permalink.