The anatomy of a winning book cover: ‘The Weight of Living’

Posted on November 13, 2017 by michaelstephendaigle

What does a book cover say about the book within?

The cover of my third Frank Nagler Mystery, “The Weight of Living,” created by Anita Dugan-Moore, in a simple design and color palette, captured what the title implies: That living has weight. 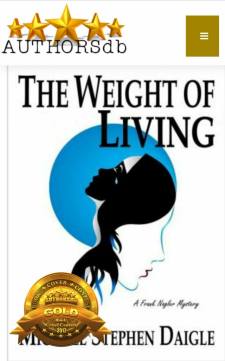 Beyond that, the cover – depictions of a nun crying, and the blank face of a girl  — drills to the core of the story. Why is the girl’s face blank, and why is the nun weeping?

I bring this up because the cover of the 2017 book was awarded a Gold Medal in the 2017 cover contest sponsored by http://www.authorsdb.com, a website for authors and readers.

There were 69 winning covers, and while readers were encouraged to vote for their favorites, it seems that the number of votes was not alone the determining factor. That strongly suggests that the judges examined the quality of the art and the connection to the story.

So why a weeping nun and a blank-faced young girl?

The girl is central to the mystery.  She is discovered on a cold March night in a grocery store Dumpster, wearing just shorts and a tank top. She does not speak nor at first interact with the other characters, being deeply withdrawn.

The mystery in the book, involving, long-hidden family secrets, financial crimes, both modern and historic, an evil manipulative villain and a family of damaged people seeking peace, centers on key elements: Who is the girl and what is her name? And why is she standing in a trash bin? Is she homeless, or is something else going on?

At the center of all this is Sister Katherine, a nun who has known Ironton, N.J,. Detective Frank Nagler since he was in elementary school. Admittedly, she was a surprise, arriving out of nowhere, but ending up essential to unraveling this story.

Here’s how this breaks down in the book, and how Anita’s artwork perfectly captured it all.

The girl is introduced in the first paragraph:

“She seemed hollow, the girl did.  Breathing, hearing, touching, but absent.  Small, dark dots sunk into an ashen blank face, eyes impossibly dull for someone so young, eyes that stared straight ahead at the faded green wall; hard, eyes so hard that did not seem to register the color of the wall, the brown of the tabletop, the light bulb above her head or the presence of anyone else.  Robotic. From the police car to the police station and into the back office she walked with slow,  short steps, and once in the room without being told, she slipped sideways into the green vinyl chair with the tear in the seat that exposed the white cotton batting inside; the chair that engulfed her, hips too small to fill the worn indentation in the center of the seat as she faced the wall, folded her hands on the table and sat upright.”

Nagler wondered if she is mentally ill, abused, or afraid.

He asks: “How dark a place does it have to be that you’d leave it wearing

what she was wearing? How  bad does it have to be that sitting in a garbage

bin was a better choice?”

But social worker Grace Holiman says, no: “She knew you were there. She was just measuring you.”

It takes, Leonard, Nagler’s blind, book-store owning friend, to offer more insight: “I was thinking about the little girl, what she must be going through.  I tried to speak to her when we were kidnapped” — he laughed — “trying to reassure her. She was so withdrawn; I could feel it in her hands when we talked.  I told her I was blind, and the only way I would know she was still there was if I held her hand. Sometimes the pressure was tight, hard, like she was holding onto this world, and other times light and playful. When she held my hands tightly, I think she was fighting against her protective instinct to slide deep within herself.”  He leaned forward and rested his cheeks on his balled fists. “I wanted at times to figuratively reach inside her soul, to free it, but I could not. Someone must, Frank, or she will be lost. We are so much alike, she and I, so apart from this world.” He wiped his eyes, now tearing.  “I didn’t even have a name I could call her. Who has no name, Frank?”

So, the little girl’s blank face is a mystery, and draws others to create meaning. Anita’s depiction does exactly that. What is she hiding? How to get below that façade to read her heart?

Then there is Sister Katherine. On the cover her uplifted face looks to God and the tears express devotion, pain and even a quiet joy.

The cover reflects this single line from the book: “She closed her eyes and lifted her face to the slight breeze. Small tears gathered and ran down her lined, perfect face.”

But what is behind the tears?

In part this: “There is evil in that — my — family, Frank. Evil for generations and it has damaged the souls of so many and broken the bodies of others.  I joined the church so those smeared by this blackness can be made pure.” She smiled. “Remember when I told you ‘get that bastard?’ Who did you think I meant?”

“God has given me many tasks, Francis. This is the last.”

That task: To offer hope and peace to her broken family, generations broken, especially her sister Sarah Lawton.

“He bought her, you know. Sarah,” she said, turning back to Nagler. “He told the Lawtons that Sarah was being enrolled in a school at his factory, and paid them five hundred dollars for the loss of her companionship and labor. My mother said they thought it was odd, but it was the Depression and that amount of money was unimaginable for a poor family.  Appleton told my parents that they would see Sarah monthly, but the truth was, they only saw her again after she was dead. I can still hear Mrs. Lawton’s wailing.”

Sister Katherine is a remarkable character, both deeply wounded, but strongly determined to find healing, not for herself, but for others.

So, her tears on the cover are not for herself, but for the lives of others.

I applaud Anita’s  cover  art and celebrate our collaboration. 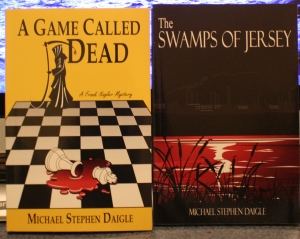 The Frank Nagler Mystery series will be on sale: THE SWAMPS OF JERSEY, A GAME CALLED DEAD, AND THE WEIGHT OF LIVING.

A GAME CALLED DEAD was a runner-up in the Shelf Unbound 2016 Best Indie Book contest.

I have been writing most of my life. I am the author of the award-winning Frank Nagler Mystery series. "The Swamps of Jersey (2014); "A Game Called Dead" (2016) -- a Runner-Up in the 2016 Shelf Unbound Indie Author Contest; and "The Weight of Living" (2017) -- First Place winner for Mysteries in the Royal Dragonfly Book Awards Contest.
View all posts by michaelstephendaigle →
This entry was posted in BooksNJ2017, collaboration, Fiction, Greater Lehigh Valley Writer's Group, Hot in Hunterdon; Georjean Trinkle, Imzadi Publishing LLC, Michael Stephen Daigle, Mystery Writers of America, Sally Ember, www.michaelstephendaigle.com and tagged "A Game Called Dead", "The Swamps of Jersey" Imzadi Publishing, "The Weight of Living", Anita Dugan-Moore., Fiction, Frank Nagler, Ironton, Morris County, New Jersey. Bookmark the permalink.

1 Response to The anatomy of a winning book cover: ‘The Weight of Living’