‘Exquisite tension’: A 5-star review of ‘The Weight of Living’

Posted on January 8, 2018 by michaelstephendaigle

My thanks to writer Reyna Favis for a penetrating 5-star review of the third Frank Nagler Mystery, “The Weight of Living.” 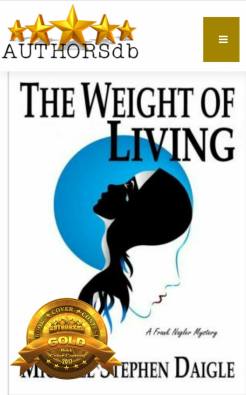 Reyna is the author of two fun and involving thrillers about paranormal investigations conducted by the unlikely team of Fia Saunders, Cam Ramsey and his dog Zackie, a psychopomp — a spirit that leads the dead into the afterlife — and reluctant Lucas Tremaine, a TV producer of ghost-hunting shows.

If you are unfamiliar with paranormal writing, her books, “Soul Search” and Soul Scent,” are a good place to start.

Reyna’s review can be viewed at  Goodreads https://www.goodreads.com/review/show/2132017627

The review: “Daigle hits his stride in this third Frank Nagler Mystery. The characters are strong and convincing, and the plot is unpredictable, with sudden twists that take even a careful reader by surprise. The setting is dark, unsettling and gritty, a northern NJ city caught up in the aftermath of decades-long political corruption and financial hardships. Detective Frank Nagler is the last honest man in this city, the white knight who defends the weak and downtrodden. Of the three books in the series, this is the one that pulls out all the stops and tells a story of such depravity and evil that there will be times when you pause your reading and you’ll want to wash your hands. But it’s in this juxtaposition of the dark and light that the exquisite tension of the story builds, the decency and strength of the Nagler character is revealed and the sordid mystery of the little girl left filthy and neglected in a dumpster unfolds. This book is recommended reading if you’re looking for an inventive plot and boldly drawn characters.” 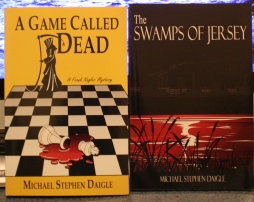 THE SWAMPS OF JERSEY was published in 2014

A GAME CALLED DEAD followed in 2016, and was named  RUNNER-UP in the Shelf Unbound 2016 Best Indie Book contest.

THE WEIGHT OF LIVING was published in 2017.

It was awarded FIRST PLACE for Mysteries in the Royal Dragonfly Book Awards.

The cover, designed by Anita Dugan-Moore of Imzadi Publishing, was presented a GOLD MEDAL in 2017 by http://www.authorsdb.com, an industry database website.

I have been writing most of my life. I am the author of the award-winning Frank Nagler Mystery series. "The Swamps of Jersey (2014); "A Game Called Dead" (2016) -- a Runner-Up in the 2016 Shelf Unbound Indie Author Contest; and "The Weight of Living" (2017) -- First Place winner for Mysteries in the Royal Dragonfly Book Awards Contest.
View all posts by michaelstephendaigle →
This entry was posted in BooksNJ2017, Fiction, Greater Lehigh Valley Writer's Group, Hot in Hunterdon; Georjean Trinkle, Imzadi Publishing LLC, Michael Stephen Daigle, Mystery Writers of America, www.michaelstephendaigle.com and tagged "A Game Called Dead", "The Swamps of Jersey" Imzadi Publishing, "The Weight of Living", Anita Dugan-Moore., Fiction, Frank Nagler, Ironton, Morris County, New Jersey. Bookmark the permalink.