We are West Hartley Parkway

Posted on June 3, 2018 by michaelstephendaigle

It was a voice from the past.

“So, what have you been doing for the past fifty years?” 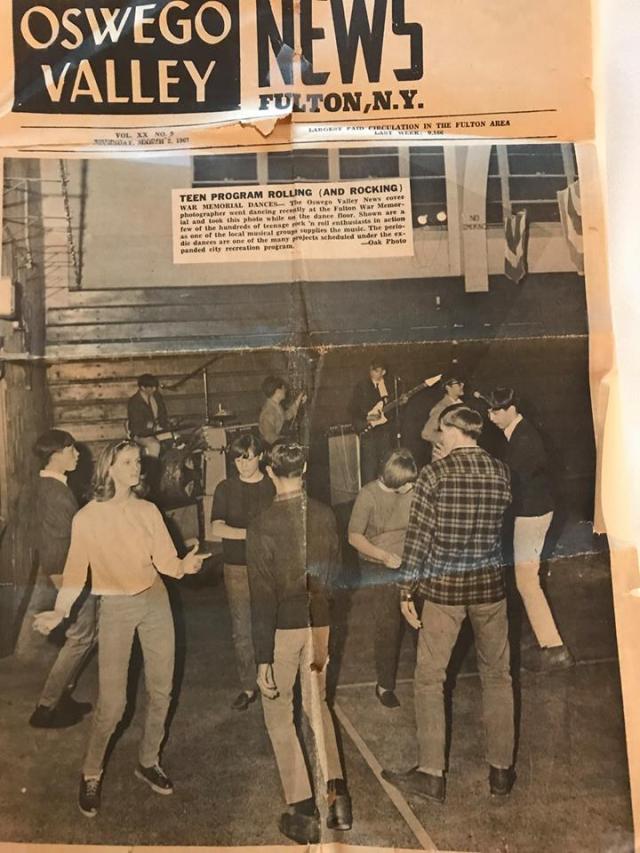 It was the voice of Jim Morrison, my best friend and rock-and-roll bandmate from Fulton, N.Y.

It wasn’t that I was trying to hide, but when you spend your life moving nearly all the time it can feel like hiding.

He was the second old friend to recently reach out on Facebook.

The other was Bruce Coville, with whom I was in elementary school in Phoenix, N.Y.

Many of you know Bruce as the much loved author of great and innovative YA books. I can say I knew him when, which is a great honor.

Jimmy and I talked for about an hour, mostly about Fulton in the mid-1960s and our band.

Yeah, I know, we were two of 290 million US teen-agers who started bands after the British Invasion, but so what.

We stood in the crowded hallway of the old Fulton High School plotting — Jimmy, who was going to play bass guitar, even though he didn’t own one or had ever played one; Ed Litwak, who did own a guitar and was sort of our Roger Mcguinn, and Ray Foster, who played piano, but never joined up.

We were talking about how to play Hermans Hermit’s “Mrs. Brown You’ve Got a Lovely Daughter.”

But we were musicians. Drummers, trumpet and sax players in the high school band. Music was not a foreign language, although rock certainly was.

Next thing we know we’re on the concrete porch at our house on Fay Street plugging into our one amp two mics and two guitars.

We woke up my older brother, and our English teacher who lived down the street marched up to tell us to stop disturbing the peace.

And I guess we were. Good for us. Rebellion, in a small way, had arrived.

Fay Street was a rural road at the end of Fulton, a subdivision waiting to happen.

Our little amp blasted out some notes and the drums and cymbals echoed off the concrete sound board of the house, and we announced our arrival to the world.
We were called “The End.” Just because.

Jimmy and I were kind of roust-about kids. We spent the summers bike riding, swimming, playing sports, and after the band was formed, practicing.

We had parents with few rules, because that was the times and that was Fulton, a hardworking small city. As Jimmy said, his father’s rule was “Be home before the street lights turn on.” 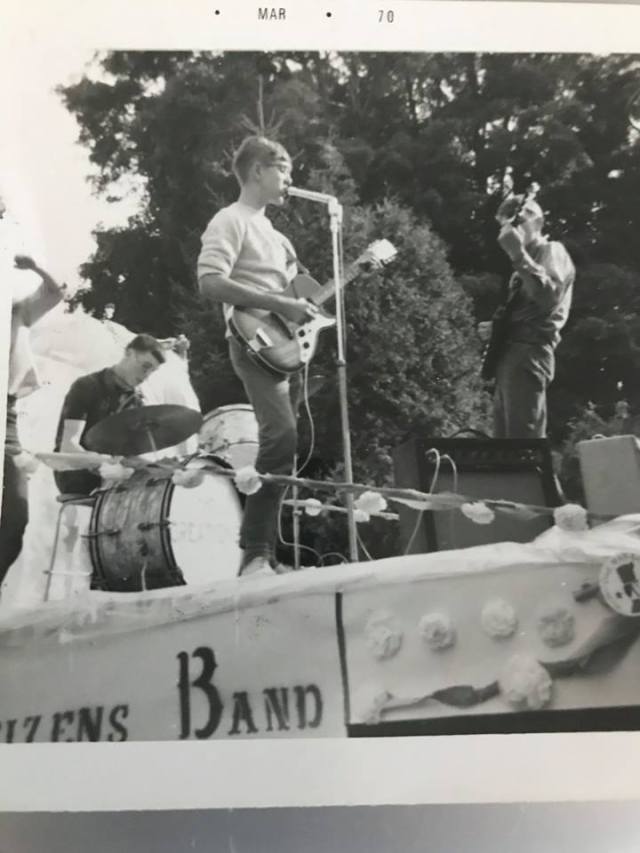 We practiced often at Ed’s house, in the basement of their home that was his mother’s beauty salon.  It was well carpeted.

We learned songs off the radio, or as Jimmy and I did when we worked as under-age cooks at the Three Rivers Diner, off the jukebox. We would sit at the counter on a break with a pile of quarters and play the same song fifteen times, trying to catch the lyrics.

We got most of them right, although I only recently learned the actual words to the fourth verse of the Animals’ “House of the Rising Sun.”

The lyric is: I’ve got one foot on a platform, another foot on a train. I’m going back to New Orleans to wear that ball and chain.”

Two things: At 13, I had no idea what that meant. And so it probably didn’t matter that I sang it in a garble of notes that sounded like a lyric.

We once performed the Stones’ “19th Nervous Breakdown” without knowing any of the verses. But we knew the chorus, and marshalled on.

One day Paul Castiglia showed up and with a cherry red Fender and he could play. He became our lead guitarist, and suddenly our song list grew.

We became the Four by Four. Again, just cause.

If early American and British rockers cut their chops at bars, we cut ours at piano recitals and parades. We played from the backs of flatbed trucks, playing once in the rain and got shocked each time our lips touched the metal mics.

That was the times and bar owners were not going to book a bunch of 14-year-olds.

We were lucky that the City of Fulton had an active youth program and a war memorial, which hosted weekly live-music dances.

We played them all.

Fulton is an isolated city, twenty-odd miles from Syracuse and about ten miles from Oswego. There was no public transportation so we all walked everywhere.

In the dry summers the dances were the biggest attraction.

We maneuvered ourselves into being the headliners and claimed the highest risers and best floor space.

But, know what. We were a good band. We played hard, stretched the songs when we could. And in battles-of-the-bands, with out of town bands coming in, we were the hometown favorites.

Eventually I moved away, as was my life at the time.

When I moved from Fulton, the band had become The West Hartley Parkway, a name that reflected the psychedelic trend of pop music.

I wasn’t with the band at that point. We had added a couple new members and there were creative differences.

And they were big, for that small town. Headlining the war memorial dances, and at one point, playing a high school concert when the school’s hallways were decorated with signs like “Follow West Harley Parkway.”

I went to that dance, even though I wasn’t in the band, and watched my friends take over the room.

At one point the audience began to chant my name, which was both gratifying and odd, and embarrassing for Jimmy, I know.
What was I supposed to do, grab to a mic and start a countdown?

I waved and smiled, and later left before the end of the dance.

I knew I was leaving Fulton for North Syracuse soon, and that time had passed.

But what a time it was.

A few years later, when I was at Harpur College in Binghamton,  I ran into one of the band guys who had led to my leaving the band. He said he was sorry for “all that band stuff.”

I laughed a little and said, don’t worry that was five years ago.  We were kids.

Jimmy and I talked about that. That end had been hard for him, he said. And it was for me.

Sometimes it seems it is hard to measure the impact your life has, and harder to recall the impacts of other’s lives on yours.

I was a Navy brat, moved a lot, all the time. Attachment can be fleeting.

(Go head, ask me why my cop hero Frank Nagler is an outsider. Write what you know.)

But the impacts last, and I am grateful that Jimmy and Bruce found me on the Internet. I hadn’t forgotten you guys, but our times become part of the world I recreate in fiction.

Thanks for connecting me again to the real world.

A NOTE ON THE PHOTOS: The Oswego Valley News, left to right: Me on drums, Paul on guitar, Jimmy in white shirt on bass, and Ed on guitar. Why were wearing ties, is beyond me.

On the truck:” The elbow at the left belongs to Jimmy’s sister Vicki.

I have been writing most of my life. I am the author of the award-winning Frank Nagler Mystery series. "The Swamps of Jersey (2014); "A Game Called Dead" (2016) -- a Runner-Up in the 2016 Shelf Unbound Indie Author Contest; and "The Weight of Living" (2017) -- First Place winner for Mysteries in the Royal Dragonfly Book Awards Contest.
View all posts by michaelstephendaigle →
This entry was posted in Fiction, Greater Lehigh Valley Writer's Group, Hot in Hunterdon; Georjean Trinkle, Imzadi Publishing LLC, Mystery Writers of America, Sally Ember, www.michaelstephendaigle.com and tagged " "The Summer of the Homerun", "A Game Called Dead", "The Swamps of New Jersey", "The Weight of Living", Amazon.com, Audible.com, Audiobooks, Fiction, Imzadi Publishing, Independent Press Award, iTunes, Lee Alan, life, Royal Dragonfly Book Award, Shelf Unbound Indie Book Awards. Bookmark the permalink.