Posted on October 24, 2018 by michaelstephendaigle

It’s done as much as it can be before going through an editing process and revisions, and all the stuff that follows the suspected completion of a book.

Before I describe the book, I would like to note the real life loss of one of the popular settings in the stories, Barry’s, a restaurant in Dover, N.J.

The real Barry’s was one of numerous businesses destroyed in a terrible fire this week. The fire, apparently fueled  by natural gas, destroyed a block of businesses and apartments in Dover’s historic downtown.

It’s a terrible loss, homes, jobs and futures. Agencies are working hard to help those who suffered these losses.

Barry’s was the kind of place that every downtown needs, fast, loud, filled with stories. As a newspaper reporter working in Dover for eight years, it was a place for a quick lunch and gossip.

It was a perfect model for what the Nagler stories needed as a central meeting place for the main characters.

So, going forward, Barry’s will continue to live in Ironton, N.J., to honor its  legacy, coffee  and Cuban sandwich.

“The Red Hand” is a prequel to the three other Nagler mysteries.

Why write a prequel?

I had tried to write this story at least three times and it wandered into other places.

The first time I tried when I was 23 or so, I wrote a version of the story that was called “A Game Called Dead.”

It was a story that needed work.

In an effort to rewrite it, the story changed and became the first actual book in the series, “The Swamps of Jersey.” That story is about politics, theft and murder and Charlie Adams is a reference point.

A second attempt to rewrite the story became the book published as “A Game Called Dead.”

At least I saved the title.

Again, Charlie Adams is a reference point, although he appears in one scene.

Neither of the rewrites told the full story of Adams killing spree that terrorizes Ironton, Nagler’s dogged police work to capture him, and the story of Martha, Nagler’s wife.

The reason it took so long to write “The Red Hand” — almost 18 months — is that the fates of some characters were known through the other stories, and it was a question of how to write a fresh story that did two key things: Answered questions posed in those other stories (and raised by readers), and filled in details of the overall Nagler story in a new way.

The other reason is structural.

The Nagler stories carry a certain mythology in style, tone and structure: A world soured by economic hardship, dirty politics and greed, and a damaged, heart-broken hero willing to take on those challenges.

“The Red Hand” tells of the beginning of that mythology. 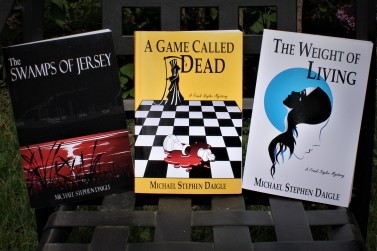 Thank you for reading the other books, because without your support, he would not exist.

Look for more details in the future.

An audiobook version of “Swamps” is available at: https://www.audible.com/author/Michael-Stephen-Daigle/B00P5WBOQC

A GAME CALLED DEAD was named a Runner-Up in the 2016 Shelf Unbound Indie Book Contest.

THE WEIGHT OF LIVING IS A MULTIPLE AWARD WINNER:

2018: Named a Distinguished Favorite in the Independent Press Awards contest.

Paperback and ebook versions are available at: