A taste of something new (and not a murder mystery)

Posted on February 19, 2019 by michaelstephendaigle

This a  piece from a story called “The year the world came to Mount Jensen, Maine.” 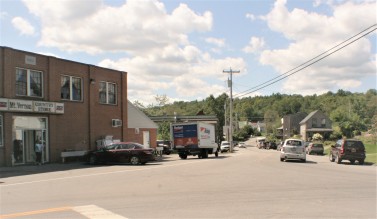 It’s the tale of a small Maine town that is going through changes and features such characters as Max Danton, a teen-ager blogger, Henderson, the diner owner — because I can’t have a  story without a diner — a few locals, and Nola and Emma Jensen, mother and daughter whose arrival in Mount Jensen  sets the story in motion, consequences be damned.

The story is generational, about rebellion, examining old relationships and postures, and standing up for oneself in the face of overwhelming odds.

After writing (and still writing) the Frank Nagler Mysteries I want to try a larger story, stretch out a bit and apply what I learn in that process to Frank Nagler and Ironton.

This is from Max’s blog:

You have to understand about this place, Mount Jensen, Maine.

But somehow that changed when Emma Jensen arrived.

Her mother was Nola Jensen, who I found out later might have been the most notorious person this little settlement had ever produced.

I mean, they were THE Jensens, from the family that named this place.

When you’re a kid, you don’t really think about the name of the place you live. Everyplace had a name. It could be named after a physical feature like Bear Mountain, or a lake, like Belgrade Lake, or maybe an Indian name that was mangled into English, like Skowhegan

But this place is Mount Jensen, Maine, and Emma’s family named it.

That was pretty cool, knowing that.

Then it got complicated. I think that was because Emma had been out there and then came here. Out there, that place none of us knew except over the Internet, the imagined world of loud big cities, murders and crime and armed men and women, protestors with signs and politicians promising everything, and more music and stories and art than any one person could ever absorb, a place so big it overwhelmed the  imagination of a little Maine kid like me. It made you want to go out there, but also made you afraid to do it, like you’d be devoured.

That’s what Emma brought to Mount Jensen, and the place was never the same.

I’m Max Danton. I’m fifteen, and this is my blog.

My Dad runs the general store. It’s a three-story square brick building that sits in the middle of the town at the crossroads and from the historical notice that hangs above the cash register, the store has been here since 1846. That’s the date carved into a hunk of granite that rests above the main entrance. We haven’t always run the general store. But you probably guessed that. My Dad bought it I guess twenty-five years ago. He was a manager for an insurance company in New York and got tired of it, came here on vacation one day and never left because he bought the store. That was a surprise to my mother, which might have been the reason she left after I was born. He just announced it one day, I’ve been told, rented a cabin on the backside of the lake for two months, went back to New York, quit his job, sold the house and then showed up one day in Mount Jensen with his family and a trailer of our furniture.

We — me, my older sister Sarah, and my Dad, Roger Danton — live in the top two floors of the grocery building. I was told that my mother left after ten years of that because she missed the big city. She’s never been back.

When I got old enough to understand it, I found out the real reason my mom left was that old Roger was screwing the postmaster, Evelyn Jones. She was after Mary Carson, a shop owner, and before Nancy Harrington, a teacher.

My father was the reason I didn’t hang out with other kids in town. I got tired of being asked “who’s next,” or does he keep a score card, and even if my mother was one of those other women in Mount Jensen.

When I was smaller, I’d hike out the Halfway Rock alone, you know, just to get away. Sometimes I’d fish, or read. But mostly I’d lay on rocks and plan battles in  my head. I had read some of the histories, about how the settlers of the village hunted and farmed, built their homes, and sometimes made peace with the natives, and other times fought them.

When Emma arrived, she joined me in the woods, we outsiders. She taught me paintball, and that was when the battles became real.

We ended up in the woods because before that we had battles that had us running all over this old dusty place, along the lake front, under the floor of the gristmill  that was held up by a couple of rotted old posts, or through the annex of the burned out Inn, through the weeds behind the Congregational church and up and down the hills, behind cars and trucks out to Bachelor’s store, a half-mile from the center of town, then back through the scrub along the road. We left paintball splatters on walls of empty buildings, on the tarred road and on the Stop sign at the main intersection. We had to head to the woods because Mrs. Wilson’s car got blasted accidently when Emma  ducked behind it and I was a little slow on the draw. I cleaned it off, but Mrs. Wilson was a mean old cuss who chased general store customers away from parking in front of her house. Not like this place had any parking lots or even parking rules. Just don’t block the road or a log truck would take out your fender. Not like we were stealing stuff. We were just a couple masked teen-agers armed with paintball markers that looked like machine guns and occasionally we’d pop out of nowhere and blast away.

Little did we know at the time but those paintball games were the start of the rebellion. And little did Emma know – or maybe she did because she’d wink and wiggle her freckled nose at me – but she set me free.